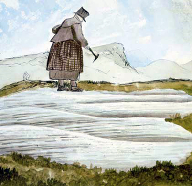 March is National Women’s History Month and today is International Women’s Day. In honor of which, we’d like to share some interesting stories of fascinating women in the geosciences:

Mary Anning (1799 – 1847), a fossil hunter from Lyme Regis on the south coast of England, is credited with discovering many new fossils, including Ichthyosaurus.

And the wonderfully named Maria Matilda Ogilvie Gordon (1864 – 1939), who studied and mapped the Dolomites mountain range of Austria and Italy. She was the first woman to earn a Doctor of Science degree in Britain in 1893.

On the same note, the History of Geology blog talks a bit about the historic challenges of doing field work faced by these and other women pioneers in the geosciences.

There are many, many more women in the geosciences that deserve similar recognition, both now and in the past. It is truly inspiring to learn about these women and their key contributions to science. As a starting place to learn more, the British Geological Survey has developed a timeline of women in geology from 1770 to present.