Robinson Noble is having an open house at our new Tacoma office on May 15 from 3 to 6 pm. I’d like to send  you a person invitation, so please come on down for a visit and a tour  the new place. We will be serving food from the local Neighbor Bistro, beer from local breweries (not sure which ones yet, Jim and I will be doing sample tastings later today just to make sure we pick the correct brews – work can be so hard sometimes), Washington wines, and various soft drinks.

We are located at 2105 South C Street, just south of S 21st and two blocks up the hill from Pacific. The Holiday Inn is across C Street and UW Tacoma across 21st. It’s easy to find, the first downtown Tacoma off ramp from Interstate 705 exits onto 21st just a few blocks east of our office. Parking can be a bit tight in downtown Tacoma, so we’ve arranged with the Holiday Inn to open their gravel parking lot just to the south of the hotel on C Street.

Come on by and say hello! 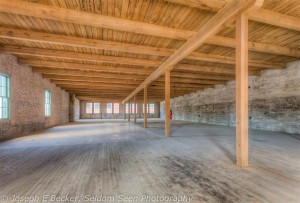 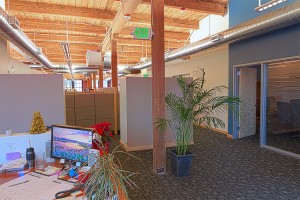 Recently, Tacoma has been receiving national and international attention for its approach to storm water pollution. One of the many ways the City has been tackling this issue is through the use of rain gardens, landscaped catchment basins designed to intercept and filter storm water prior to discharging to Puget Sound. 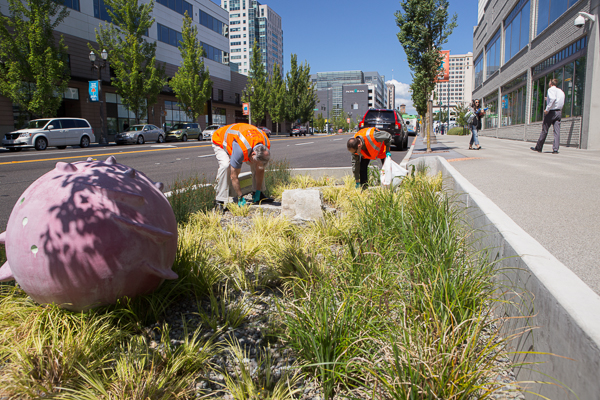 There are 14 rain gardens incorporated in the recently completed Pacific Avenue Streetscape Project, located along Pacific Avenue between South 7th and 15th Streets. The plantings are a welcome addition to this downtown corridor, and a local artist’s sculpture pieces add a splash of color and whimsy.

In May, Robinson Noble officially adopted two of the City’s rain gardens, located at 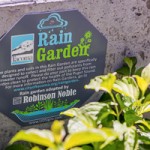 15th Street and Pacific Avenue in front of the DaVita Building and the Aviateur French Restaurant. We maintain the gardens to keep them clean and monitor them to verify that they function as intended. Robinson Noble is also sponsoring Wellspring 2014, a two-day conference focused on clean water issues and technologies held at the Greater Tacoma Convention and Trade Center on October 14th and 15th. Come join us!