Overview of the Process.

The dredging and cleanup of contaminated sediments in Northwestern waterways is important to the Northwest’s economy and in maintaining environmental integrity. In 1995, based in large measure on data developed for the dredging programs, Ecology developed the Sediment Management Standards (SMS; WAC 173-204) Rule to protect human health and the environment from potential impacts of contaminated sediments. The Rule was originally promulgated based on extensive research and regulatory guidance available for marine/estuarine sediments, but the body of knowledge for freshwater sediments has subsequently been developed as well and is being incorporated into the Rule, as originally intended. Two separate, interagency dredging programs have been spearheaded by the USACE (Corps) for regulations and evaluation procedures for dredging of marine/estuarine and freshwater sediments. The former, largely centered on Puget Sound and Grays Harbor dredging issues, has been led by the Corps’ Seattle District and is referred to as the Dredged Material Management Program (DMMP), formerly the Puget Sound Dredged Disposal Analysis (PSDDA). Its freshwater counterpart is the Regional Sediment Evaluation Team (RSET), largely focused on the Columbia Basin and the Willamette River Basin, and led by the Corps’ Portland District. Both programs have generated a wealth of environmental data and regulatory guidance over the years, the former (DMMP) since the early 1980s. 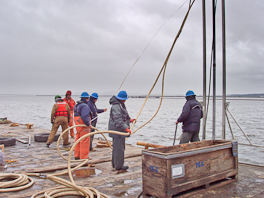 Ecology is currently in the process of updating the SMS Rule, based in part on new data generated as part of the DMMP and RSET programs, as well as extensive national guidance from the Corps in Washington, D.C. Detailed guidance on evaluation and post-dredge placement (disposal) of contaminated freshwater and marine sediments has also been given from the Corps’ extensive dredging research facility (Engineers Research Data Center in Vicksburg, MS). The SMS Rule was originally intended to be updated and revised on a triennial basis; however, many of the technical, regulatory, and policy issues have proven to be unexpectedly thorny and have required much more time, especially in light of economic slowdowns and agency cutbacks. Thus far, Ecology has issued a number of “white papers” to the scientific community; held a series of public workshops; and convened scientific and regulatory working groups comprised of other State, federal, and local agencies, academia, the consulting community, and environmental advocacy groups. In light of the voluminous feedback from multiple stakeholders, Ecology’s current timeline is to finalize the Rule revision by January 2013.

The SMS Rule has been widely regarded as “groundbreaking” legislation, as Washington is the first and only state to establish enforceable, numerical sediment quality standards, based in part on federally listed Threatened and Endangered species (especially several salmon stocks and wild Orca), protected under the Endangered Species Act (ESA), which inhabit the waters adjoining a major metropolitan area (e.g. the greater Seattle-Tacoma-Everett urban area).

The regulatory context and technical framework supporting the Rule has evolved over the past 20 years and is strongly in need of a “facelift.” Specifically, the original standards were derived entirely based on benthic acute and chronic toxicity data, and did not consider the potential effects of bioaccumulation, which may or may not be consistent with toxicity data (i.e. the effects from bioaccumulation may different than those caused by direct exposure or dosing). Because a significant part of Ecology’s charge for maintaining and enforcing the Rule is to protect human health against consumption of sediment-borne contaminants via fish and shellfish, this facet is arguably the largest shortcoming of the original Rule, and it has been reworked considerably to reflect more current scientific thinking on potential adverse effects associated with consumption of contaminated fish and shellfish. 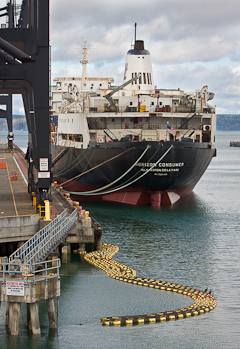 An extensive freshwater sediment data base has been developed in recent years, which is now adequate to support definition of freshwater standards. Data have largely been generated from freshwater sediment projects related to the Columbia River basin and its high number of listed salmon and other populations protected under the ESA. Notably, the original Rule was written without regard for the presence of background concentrations of persistent, as well as frequently bioaccumulative and toxic, chemicals (e.g. dioxins, PCBs, mercury, pesticides). Advances in the science have allowed us to understand the effects of direct toxicity and/or bioaccumulation at very low concentrations of some of these hazardous chemicals, which has necessitated guidelines for distinguishing regional and natural background levels from those generated from a known source.  These advances have also compelled us to consider the technological limits of chemical laboratory analysis – often expressed as practical quantitation limits (PQLs).  A key point of contention, for example, is whether dioxins and furans generated from former pulp and paper operations common in the Northwest  may be toxic at extremely low (parts per trillion) concentrations. Distinguishing the levels at which toxicity from these chemicals could be occurring from background levels and PQL values has been the subject of much debate. Now, with the proposed revised Rule, clarification has been achieved in Section 570 of the SMS.

Additionally, the federal National Oceanic and Atmospheric Administration (NOAA)’s well recognized Northwest Fisheries Science Center (NWFSC) in Seattle has generated a steady stream of quality ecotoxicology data, white papers, publications, and proposed sediment guidelines for specific contaminants, much of which is based on local native species. For example, NWFSC has derived a series of contaminant-specific (e.g. PAHs, PCBs, dioxins, metals) tissue residue values (TRVs) for edible fish and shellfish including English sole, starry flounder, a variety of salmon stocks, and many other local aquatic species. These values are intended to be “tied back” to contaminated sediments, and these TRVs would be useful in protecting human consumers against the toxic effects of contaminated fish and shellfish. Integration of this data set into the SMS is only beginning as Ecology is seeking to incorporate these data and proposed guidelines into the SMS Rule revision process. The list below includes several nettlesome or controversial issues that Ecology is seeking to address in the revised Rule.

Partial list of technical issues that Ecology endeavors to incorporate into the revised Rule (appropriate section numbers within WAC 173-204 shown):